Zsolnay Light Festival is awaiting your application, so that this year your work will be included in the installations presented along the Route of Light!

The final date for submission of tender applications is 10 March 2023.

Hungary's first and only light festival, the Zsolnay Light Festival in Pécs, is going to be held for the seventh time. Between July 6 and 9, 2023, we are awaiting the audience to an event that will organically combine the world of light festivals with street-art productions, concerts, theatre, and contemporary circus performances.

In addition to the Zsolnay Light Art Mapping Competition, the most intense experience of the festival is offered by the works of the some 25-stations light tour, the Route of Light. The Route of Light presents a particularly wide range of domestic and international light-art programs, and visitors can see light creations based on analogue and digital technology alike, as well as static and interactively controlled installations.

Zsolnay Light Festival is the largest summer outdoor event in the city; in 2022, the event attracted as many as 100,000 visitors.

The Mediterranean-style city center of Pécs offers a perfect venue for this Festival of Light. In Hungary, besides Budapest, only Pécs can boast the fact that almost all historical periods have left a unique imprint on the fabric of the city.

Pécs has always been a multi-ethnic settlement where various cultures layered on top of each other over the centuries; traditions and values of nationalities were combined during its two-thousand-year-old history.

A part of the late Roman, early Christian cemetery of Sopianae, the Roman predecessor of the city of Pécs, is a UNESCO World Heritage Site. In 2010, the city was awarded the title of European Capital of Culture. The charm of the city undoubtedly includes buildings reminiscent of the Turkish occupation. The best known of them is the mosque of Pasha Quashim in Széchenyi Square, which was eventually converted into a Christian church. 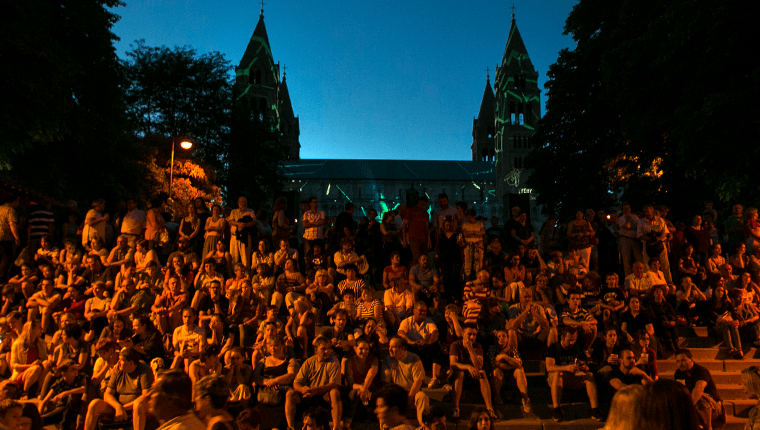